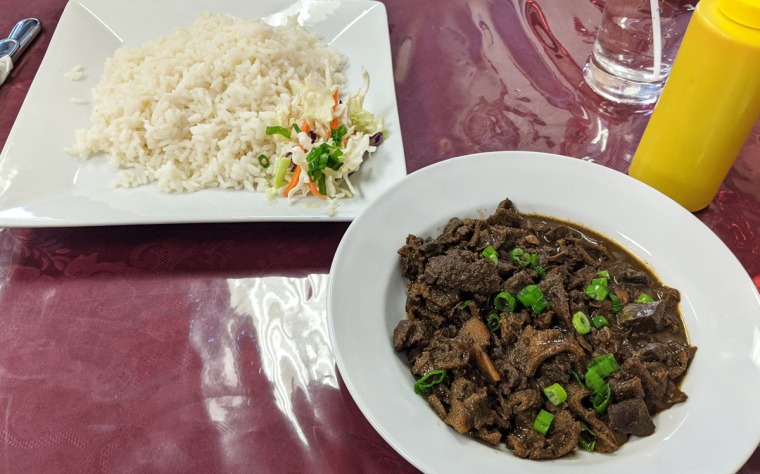 It’s not often that a dish really blows me away — but the pachownee at Caribu West Indian Cuisine did.  It’s an entirely offal-based dish, consisting of tripe, stomach, liver, and heart, and it was perfectly cooked to an almost improbable extent.

The liver and the heart had a nice meaty bite, but weren’t tough at all; everything else was amazingly tender.  Silky, even, which certainly isn’t a texture I’d normally associate with something like tripe.  I don’t know how they did it, but man, it was good.

It was also quite tasty, with a rich, curry-infused meatiness and none of the overt funkiness you might associate with offal.  It’s got a bit of a kick, which is amped up by the bottle of vinegary hot sauce they have on the table.

It comes with plain white rice and a bowl of dhal (creamy lentils) to make things a bit more interesting.

Ordering it was kinda funny.  The waitress looked at me with bemused skepticism and asked if I knew what the dish was.  “It’s a whole bunch of innards,” she explained.  She smiled when I confirmed that I still wanted it, as if I had passed some sort of test. 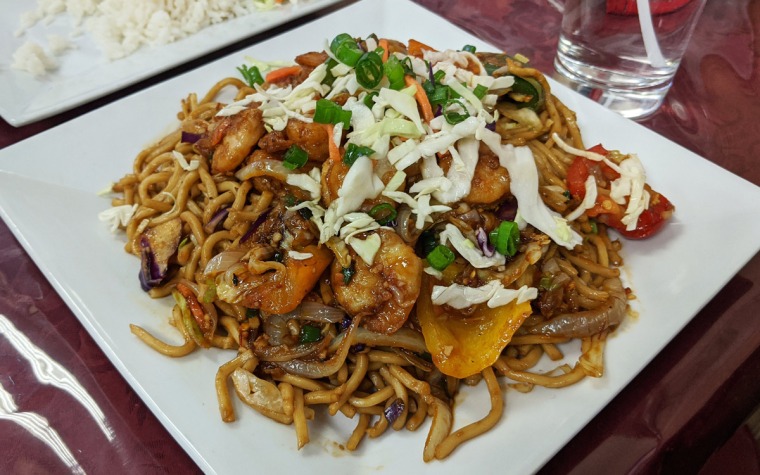 I also tried the chow mein with pepper shrimp, which was tasty enough, with a nice balance of savoury, sweet, and heat, and some very well prepared shrimp.  But the noodles were mushy and the veggies were undercooked; it definitely couldn’t hold a candle to the amazing pachownee.

The last time I tried fufu (which is basically a much starchier version of mashed potatoes that’s generally made with cassava or plantain), I found it to be an acquired taste that I haven’t quite acquired. 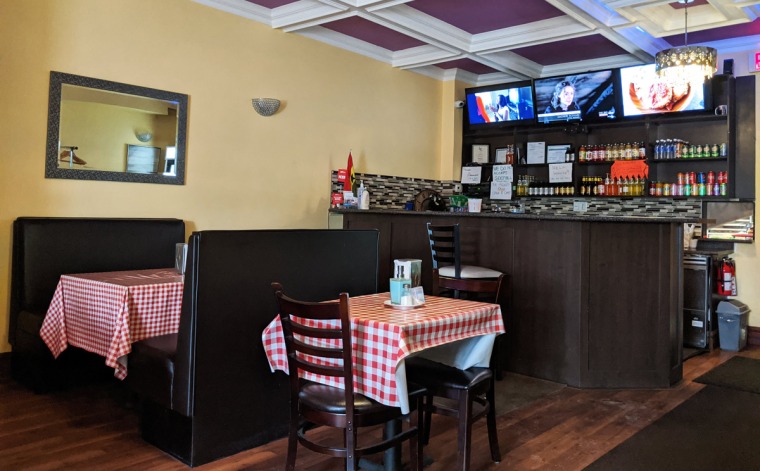 Diehuo is a Ghanaian specialty that the menu describes as “smooth white corn dough in sauce with goat meat, tripe, cow foot, and cow intestines.”

The diehuo itself was tasty enough, with a nice thick texture that isn’t overly starchy or gummy.  But it’s the “sauce” they serve it with (which is really more of a soup or a stew) that absolutely makes the dish.

It’s an absolute bonanza of flavours, with an addictive vibrancy and a decent amount of heat to keep things interesting.  It has a mildly slimy texture, but not in an unpleasant way — it reminded me of mulukhiyah, a really tasty Middle Eastern soup.

And with the exception of the tripe, which was leathery and inedible, all of the meats were tender and delicious (though I didn’t get any intestine).

It’s the type of dish that makes me really happy to be doing this blog, because it’s something I otherwise probably never would have tried, and it’s so good.

The food court at the newly-renovated Westwood Square Mall has clearly not been a particularly big hit; huge swathes of the restaurant space has yet to be filled, and when I showed up at around noon on a weekday, the place was mostly empty.

Naija Jollof, a restaurant specializing in African eats, was the only place that seemed to be doing okay.  Which suited me just fine, since that’s what I came for.  Bonus: no issues finding a seat. 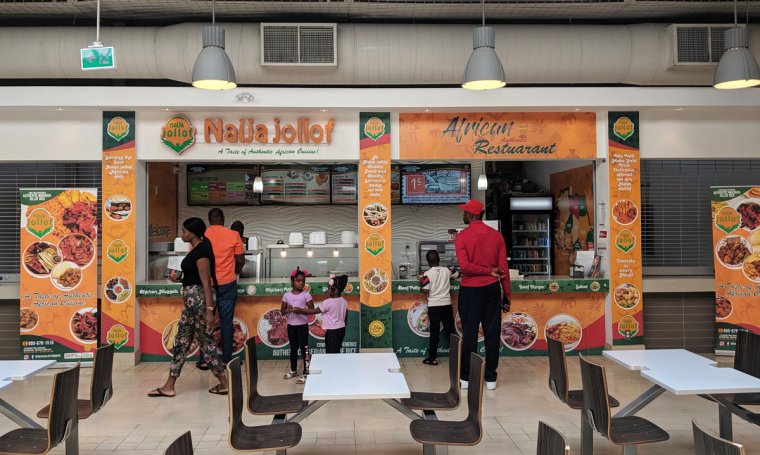 I tried to order the daily special, Togo, which is described as “plantain pottage with spinach & broken pieces of fish.”  I was told that they didn’t actually have this, but that they could substitute it with something similar.  When I asked what the substitute dish was called, the surly woman behind the counter gave a one word answer of “spinach” in a tone that implied follow-up questions wouldn’t be appreciated.

So I have no idea what the dish I ordered was called, or if it’s actually from Togo.  Based on some Googling I think it might be a dish called gboma dessi, but that looks considerably saucier than what I had, so I’m not sure.

Whatever it was, it kind of reminded me of collard greens, but with big chunks of beef instead of bacon. 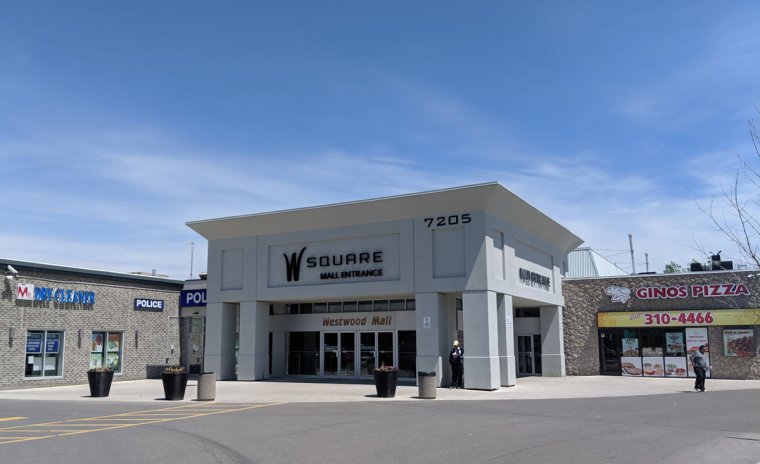 It was pretty good — it’s salty, tangy, and a little bit spicy, with a texture that’s well cooked but still has a bit of bite to it, and a deep spinach flavour.  It contrasts quite nicely with the sweet, creamy plantain.  It’s a tasty combo.

The chunks of beef, on the other hand, weren’t great (they might have been goat, but the very mild flavour makes me think beef).  There was a huge chunk on top that I believe was tripe; it was inedible.  And when I say it was inedible, I mean that in the most fundamental sense of the word.  I couldn’t put a fork through it or bite into it.  It was like rubber.

There was, however, another piece that was much better.  It was still fairly tough, but I was able to eat it, so it had that going for it (there was also a third piece that appeared to be entirely sinew and veins.  It was just as bite-resistant and rubbery as the tripe.  The less said about that one, the better).

Thankfully, the spinach was tasty enough on its own that the shoddy beef didn’t feel like a huge issue. 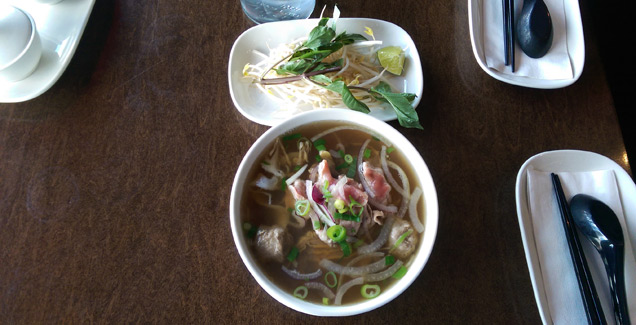 Let’s get the obvious out of the way first: the name of this restaurant is probably going to make you cringe.  It’s an unfortunate bit of frat-boy humour that belies the legitimately tasty food that can be found inside.

You’d also expect an authentic Vietnamese joint to be a bit more bare-bones in its decor; the best Vietnamese restaurants in the city tend to have an endearingly run-down vibe that’s a bit at odds with the slickly appointed dining room you’ll find here.  Again: don’t judge this book by its cover.

I ordered the Fabulous Beef Noodle Soup, which the menu describes as being filled with a cornucopia of meats: “Rare eye round, well-done flank, soft tendon, tripe, and beef meatballs.”

You have the choice of a medium or large bowl; the medium is absolutely crammed with noodles and meat, so unless you have a particularly voracious appetite, it’ll do.

A bowl of pho like this lives and dies by its broth, and this one has one of the most richly flavourful broths that I’ve tried (but then I’ve had maybe ten bowls of pho in my entire life, so don’t get too impressed).  Kicked up with a couple of spoons of chili sauce and a squeeze of lime, and you’ve got a really satisfying bowl of soup.

The noodles are perfectly cooked and abundant, and the variety of meats gives the dish an appealing mix of flavours and textures: there’s the tender combination of rare and well done beef, the distinctively chewy/crunchy bite of the tripe, the unctuous richness of the almost melt-in-your-mouth tendon, and the hearty meatballs.  There wasn’t a weak link here, which was nice.