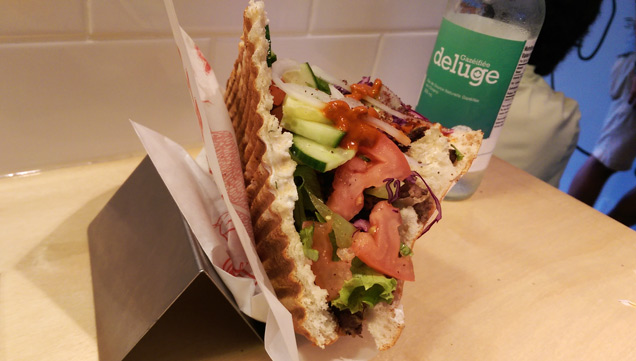 I don’t know if doner is the first dish that springs to mind when you think of German cuisine (it’s definitely a thing, though), but I was in Kensington Market, stumbled across this place, and thought: Yeah. Why not?

As it turns out, it was only the restaurant’s second day in existence, which is much sooner than I’d typically write about a place — but since the food and service were both quite good, I’m going to assume (or hope) that they’ve managed to avoid the kinks that can gum up a brand new restaurant.

The menu is fairly simple, with a few different types of German doner, along with currywurst (Bratwurst topped with a sweet curry sauce) and a handful of sides.  I went with the veal and lamb doner, because whenever I see lamb on a menu, I have a hard time saying no.

Packed with a generous amount of tasty, well seasoned meat that’s topped with a salad’s worth of fresh veggies (tomato, cucumber, lettuce, cabbage, and onions) and your choice of sauces (the man behind the register suggested yogurt and hot sauce), it’s probably not anything that anyone is going to get too excited over, but it’s a very good sandwich.

The bread is a highlight, and probably the most distinctive thing about it — it’s perfectly toasted,  with a great, crispy exterior, and a fresh, fluffy interior.  It’s much more substantial than the typical pita you’d get in a shawarma sandwich or a gyro, but it suits the doner perfectly.

The sauces probably should have been a bit more abundant (I got plenty of sauce-less mouthfuls), but aside from that it was a fine sandwich.  Mighty fine.

My dining companions tried the halloumi doner — which featured breaded and fried pieces of halloumi cheese in place of the of meat — and were both quite impressed.  I’ll have to try that one next time.