Kunafa is great.  It’s a Middle Eastern dessert that consists of a layer of gooey white cheese topped with syrup-infused pastry.  I know that cheese in a dessert sounds odd, but the particular cheese they use — called nabulsi — has a neutral flavour and a pleasant gooeyness that makes it ideal for desserts.

Plus: everyone loves tiramisu and cannoli.  A cheese-based dessert really isn’t as strange as you might initially think. 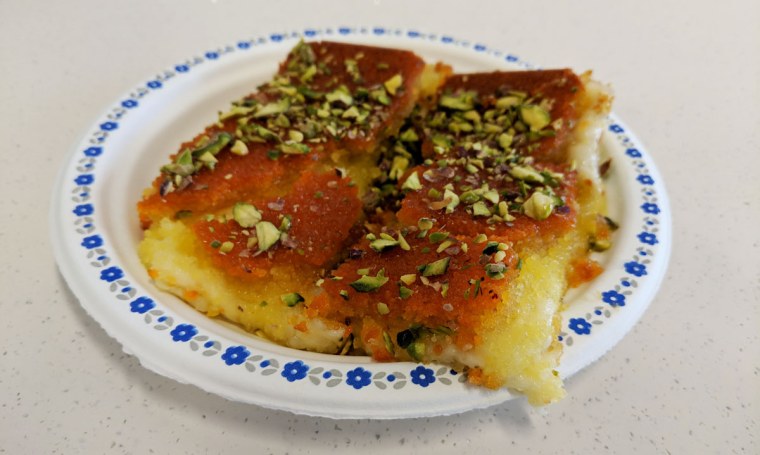 The problem with kunafa is the same problem with pizza; because of the melty cheese, it really has to be eaten when it’s relatively fresh out of the oven.  As it sits out, the cheese starts to congeal and the pastry loses its moisture.  You can reheat it (or leave it on a hot plate as they do here), but it really isn’t the same.

The version they’re serving at Kunafa’s was quite tasty, but this was clearly an issue.

As you can see, the cheese was still very stretchy, but it was also a bit too tough.  If using a fork to cut through the cheese completely mangles the dessert, then your kunafa has probably been sitting out too long.  The pastry, too, was more dry and crumbly than it should have been.

But don’t get me wrong — I still really enjoyed this.  I’m not sure that there’s anywhere in the GTA that serves a really great kunafa, so this is about as good as it gets.  Nitpicks aside, it’s still delicious.