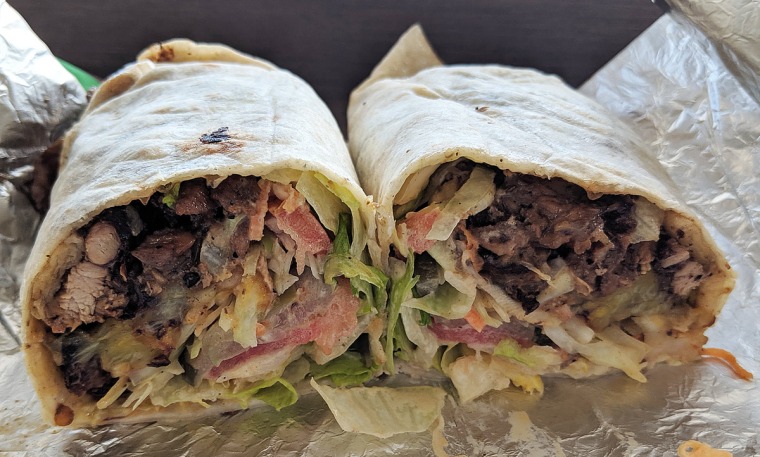 I just talked about Brunei, a tiny country with a population of 400,000 that looks positively huge compared to Dominica (not to be confused with the Dominican Republic), an island nation in the Caribbean with a population of 71,000.  It measures at 750 km2, which is about a tenth of the size of the GTA.

As for Chris Jerk as a representative of Dominica, I’m cheating on several levels.  It obviously doesn’t serve Dominican food, because how could it?  The country is way too small to inspire restaurants outside of its borders. 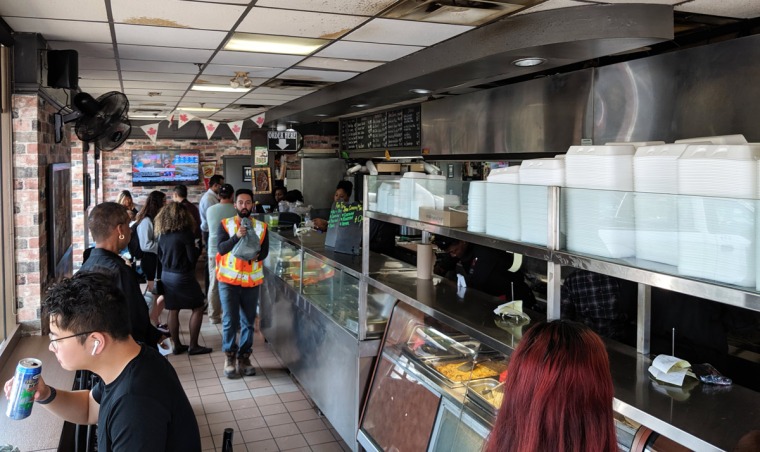 Chris Jerk serves Caribbean/Jamaican food… kinda.  Their claim to fame is jerk chicken shawarma, which you can order in a wrap, on a plate, or in a poutine.  No, it’s not particularly authentic.

I tried the wrap, which is served in a tortilla.  So it’s part Jamaican, part Middle Eastern, part Mexican, and all delicious.

Seriously: it’s so damn good.  The restaurant was absolutely packed when I visited close to noon on a weekday, and it’s very, very easy to see why.

The wrap comes stuffed with the usual assortment of veggies, along with BBQ mayo, garlic mayo, and hot sauce.  Fried plantain is an optional upgrade for an additional fifty cents.

The shawarma itself is absolutely outstanding.  The chicken is perfectly cooked and tender, and the crispy bits?  Out of control.  The amount of texture and flavour you get from the dark brown bits is ridiculous.

It’s basically just really great shawarma — but then it’s got those jerk spices, which makes it delightfully unique.

The sauces and the veggies compliment it perfectly, and the ratio of meat to other stuff is perfect.  It’s a seriously meaty wrap, but with enough toppings to balance it out.  Plus, the plaintain adds a nice creamy sweetness that contrasts nicely with the crispy, savoury meat.

I know a lot of people are sticklers for authenticity; Chris Jerk is Exhibit A on why they’re wrong.  Deliciousness is all that matters, and the jerk chicken shawarma has that in spades. 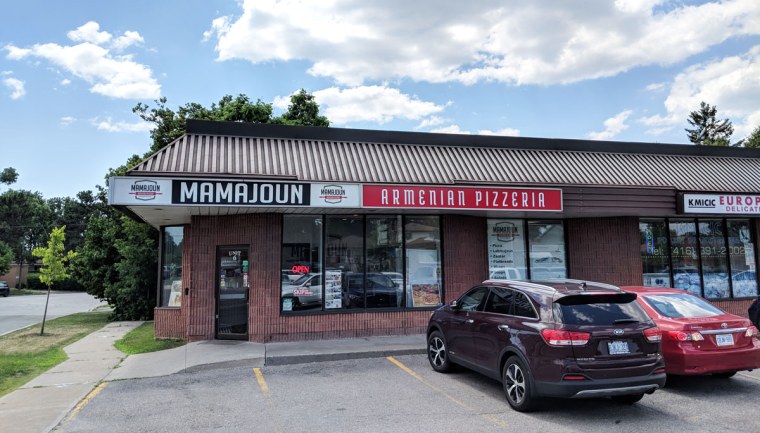 Mamajoun is an Armenian pizzeria that specializes in lahmajoun, a tasty flatbread that’s traditionally topped with a mixture of ground beef and minced veggies.  It’s mostly a take-out place, though they do have a few small tables and a counter where you can sit.

You can get your lahmajoun on its own, or you can choose from various fillings; they wrap the whole thing up and stick it in a panini press to give it a nice crispiness on its exterior. 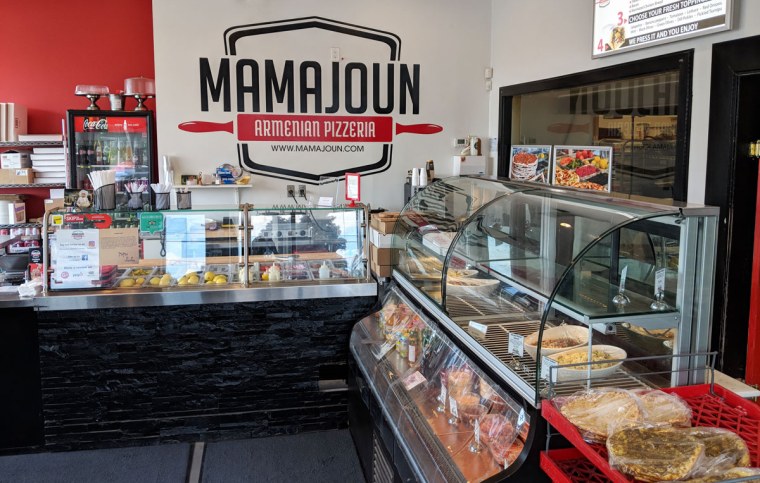 I’ve been eating the Middle Eastern version of these (called lahm bi ajin — basically the exact same thing, but with a different name) for pretty much my entire life, but for some reason it’s never occurred to me to cram more stuff in there and eat it like a wrap.  And I have no idea why; it’s kind of ingenious. 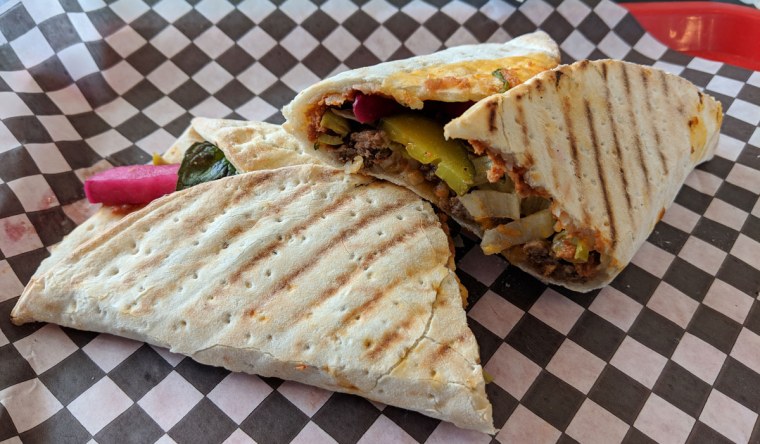 I chose to have mine filled with soujouk, which is a really tasty sausage that basically combines the intense flavour of a cured sausage with the texture of a fresh one.  You can also fill it with the usual assortment of olives, pickled goodies, and hot peppers that you’d expect from a Mediterranean wrap.

It was quite tasty.  The lahmajoun itself had a nicely spiced meaty flavour, with a good contrast of fluffiness and crispiness on the flatbread.  The soujouk and the other fillings worked really well; between the vibrant sausage and the various vinegary pickles, it’s an absolute face-punch of flavour.  I thoroughly enjoyed it.

I’m gonna admit that pretty much the only thing I know about Laos is that it’s where Hank Hill’s neighbour is from on King of the Hill.  I sort of figured that I’d be learning about all kinds of countries while doing this blog, but to be honest, not really (unless you consider eating a dish or two without context to be learning about a place, in which case, sure!  I’m learning a lot!).

But now I can tell you about a couple of Laotian dishes I had at Sabai Sabai, so I guess I know a tiny bit more than I did before. 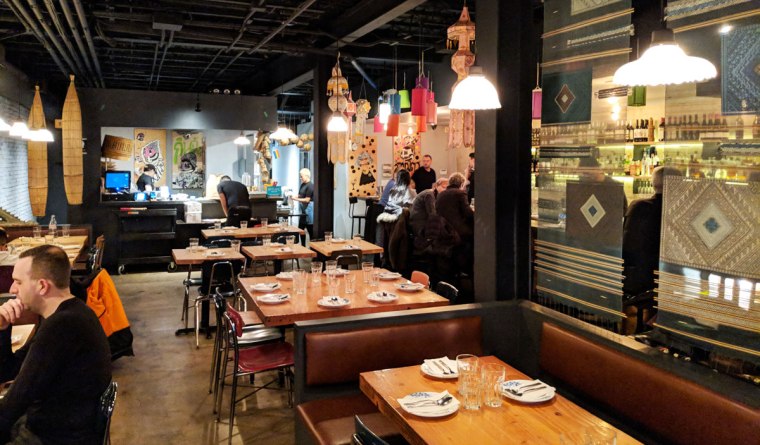 I started with the laap lao, which the menu describes as a minced pork salad, and the “most popular dish of Laos.”  Well, okay.  Sold.

I can see why it’s so popular in Laos (and elsewhere) — it’s delicious.  It’s a simple dish, with a bowl of ground pork accompanied by a plate of iceberg lettuce leaves for wrapping.  The pork absolutely pops with flavour — it’s addictively tangy and herby, and it’s almost impossible to stop eating.  The fresh crunchiness of the lettuce is a perfect accompaniment to the flavourful pork.  It’s great. 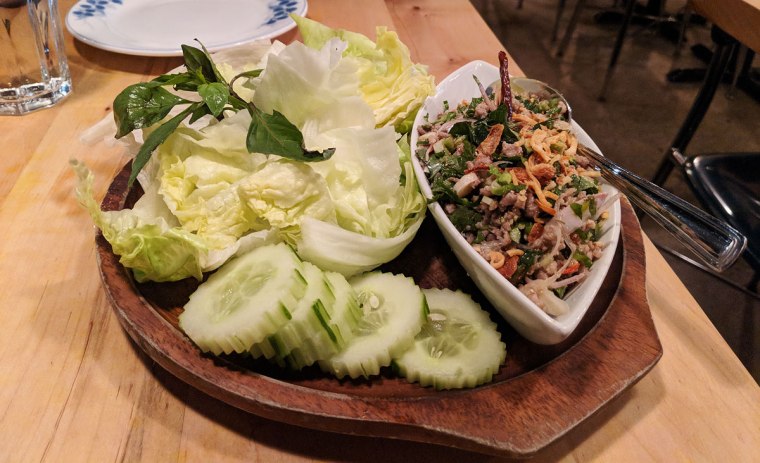 My main was the mee kati (coconut noodles).  This was really tasty, though it was exceptionally awkward to eat.  It essentially comes deconstructed, with the plate consisting of a pile of dry noodles topped with crispy onions, a small bowl of sauce and chicken chunks, and an even smaller bowl of crushed hot peppers.

I wasn’t sure how to approach this.  Was I supposed to pour the sauce over the noodles?  The way the plate was arranged, it didn’t seem like it.  A bowl would have been more appropriate if this were the intention, plus there was a banana leaf on the plate, and if I poured sauce over the noodles, some of it would inevitably wind up under the leaf.  So… no pouring, I guess? 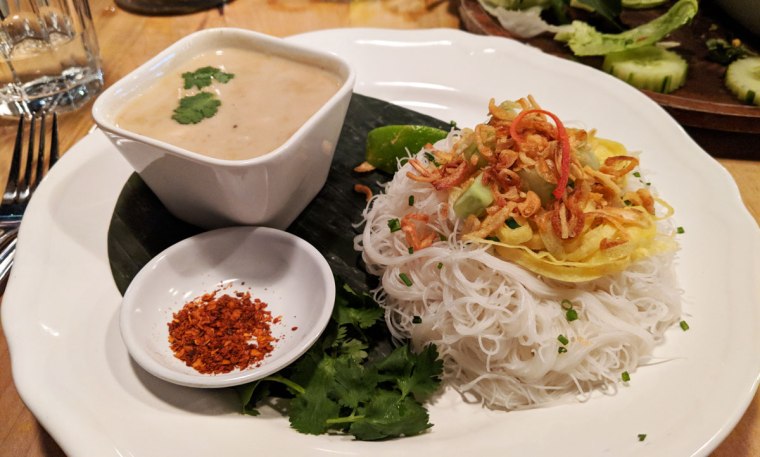 But because the noodles were completely un-sauced, they all stuck together in one stubborn clump.   I eventually sprinkled the hot peppers onto the noodle clump, and then tore off chunks and dipped them into the sauce.  But I clearly over-dipped my first few clumps, because by the time I was about halfway finished with the noodles, the sauce was almost entirely depleted.  It wasn’t the best.

It tasted really good, though!  For all the awkwardness of actually eating it, that’s what really counts — the sauce was creamy, coconutty, rich, and delicious.  The crushed peppers gave it a mild kick, and the fried onions added some crispiness and a decent amount of flavour.  The chicken pieces tasted a bit leftovery, but all in all it was a tasty dish.  I just wish they’d drop the unwelcome pretension and serve it assembled in a bowl like normal people.

Roti is another one of those foods that’s eaten in any number of countries; I could have picked from quite a few for Shandra’s Roti Shop. Curry chicken roti is a popular choice in Grenada, so that’s what I went with.

Shandra’s is a popular place.  I came at around noon on a Thursday, and the restaurant was absolutely packed.  A place this crowded is usually a pretty good sign that your lunch choice was solid.

I ordered the aforementioned curry chicken roti, which was crammed with large, tender pieces of chicken in a creamy, flavourful curry sauce.  My only issue was the complete lack of spice; you kinda just assume a dish like this is going to singe your tastebuds and add a layer of sweat to your forehead, so the very thorough mildness of this curry was a bit of a disappointment.

The roti shell is actually two thin layers encasing a dry mix (consisting of ground yellow split peas and other spices, according to Wikipedia), which adds even more flavour and texture.

It was quite good.  Though the lack of mouth-burning spice (or any spice at all) was a bummer, it’s still something I’d happily eat again.