Despite the name, King’s BBQ Chicken Restaurant serves quite a bit more than just roasted bird — specifically, they specialize in chifa, a subset of Peruvian cuisine that gives Chinese food a South American twist.  Apparently it’s been a big deal in Peru since the 1920s, courtesy of a large influx of Chinese immigration in the late 1800s and early 1900s.

The most beloved example of chifa is probably lomo saltado, a stir-fried beef dish with the bizarre (and delightful) addition of french fries. 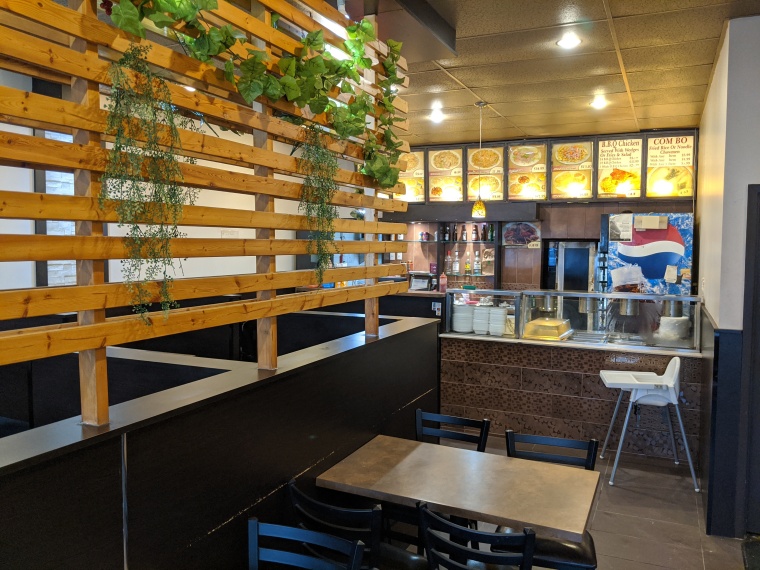 It’s odd.  It mostly tastes like any number of stir-fries; it’s sweet, savoury, and a little bit smoky from the blazing hot wok.  But then there’s the very generous amount of fries mixed in, which work surprisingly well. 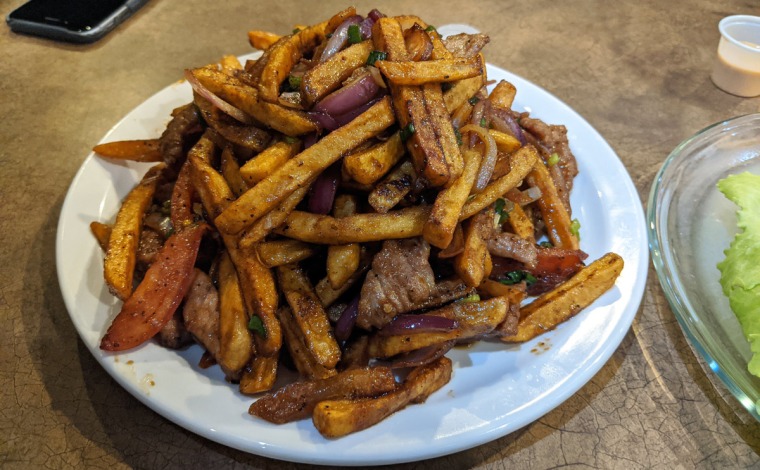 It’s not something I would have guessed would be as delicious as it is, but it tastes kind of like the tasty love child between Chinese food and a plate of loaded fries.  It doesn’t need rice, because the starch is built right in.  It’s ingenious.

They don’t just serve chifu at King’s BBQ Chicken; it wouldn’t be a Peruvian restaurant without ceviche, Peru’s national dish and culinary claim to fame (it’s served in several countries, but it was invented in Peru).  The version here is quite tasty, with a nice acidic bite that doesn’t overwhelm, pops of spice from finely diced hot pepper, and a nice contrast in textures between the meaty fish and the crunchy onion.

And of course, you can’t go to a place with “BBQ Chicken” right in the name without trying the BBQ chicken.  It’s very good — it’s not as distinctive as the lomo saltado or the ceviche, but it’s a quality piece of chicken.  It’s nice and tender, and the seasoning is tasty.  It’s good stuff.

Apparently steak and eggs are a pretty big deal in Latin America; I’ve had a version of this meal for Colombia, Ecuador, and now Uruguay.

The one they’re serving at La Pasiva wound up being almost exactly the same as the one I had at Comedor Popular Ecuatoriano.  It’s a relatively simple dish: steak and eggs, a salad, and potatoes (you can choose between potato salad and fries — I went with potato salad).

I liked it even better than the version at Comedor Popular Ecuatoriano.  The well done, thinly-cut steak was a little bit tough — but it was still much more tender than Comedor’s version, and the seasoning was nice and zingy.

It’s also a nice reminder of why steak and eggs is a classic dish; they go very well together. 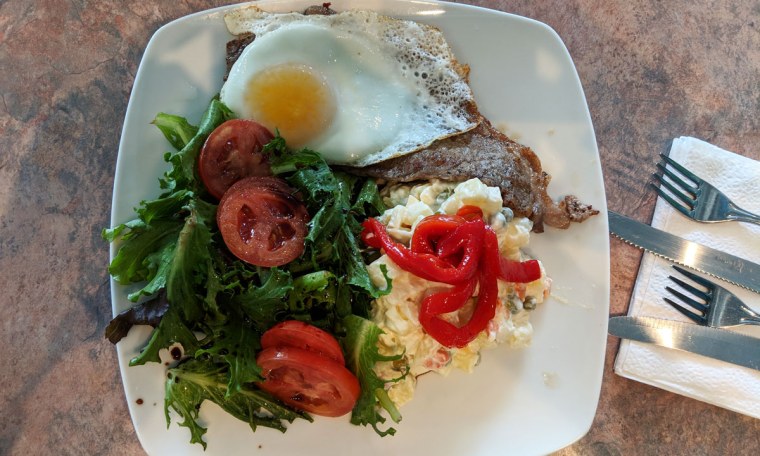 The salad, with its standard vinaigrette, didn’t particularly stand out, but the potato salad was quite delightful.  I’m generally not a fan of potato salad, mostly because it almost always features raw onion, and that’s not my favourite flavour (putting it mildly).  But La Pasiva’s version was refreshingly onion-free; it was a little bit sweeter than I’d like, but the potatoes were nice and creamy, and it had enough of a vinegary bite to cut the sweetness.

I also tried the pasiva (because you should never leave a restaurant without trying its namesake dish), which consists of two hot dogs wrapped in fatty ham and served with melty cheese on top.  It’s served on an enormous pile of fries.

Was it good?  I mean, yeah, of course it was good.  Did you not read what I just wrote?  It’s a hot dog wrapped in ham and covered with gooey cheese.  The hot dog had a nice smokey flavour, and the whole thing was quite satisfying.

The fries — which were thinly-cut and were very similar to what you’ll find at McDonald’s — were okay, but they had clearly been sitting out for a while, so they weren’t hot and they were somewhat dried out. 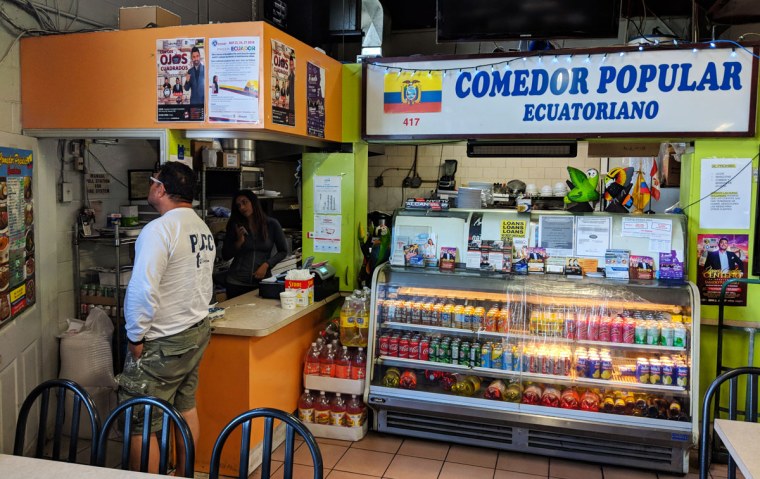 Though I’ve already written about a restaurant in the Plaza Latina food court, another visit was probably inevitable.  That place is an absolute treasure trove of Latin American food.

This time, I visited an Ecuadorian restaurant called Comedor Popular Ecuatoriano.  I wasn’t sure what to order; the woman behind the counter recommended a dish that came with a hearty soup and churrasco, an Ecuadorian take on steak and eggs.

The soup came out first, and it was really, really good.  I didn’t see it on the menu, but I’m pretty sure this was sancocho.  I had this particular soup at a restaurant called Mi Tierra, but this one was clearly the superior version.  The broth had a really satisfying chicken-infused flavour, with a nice hit of cilantro and a zestiness that kept me coming back for more. 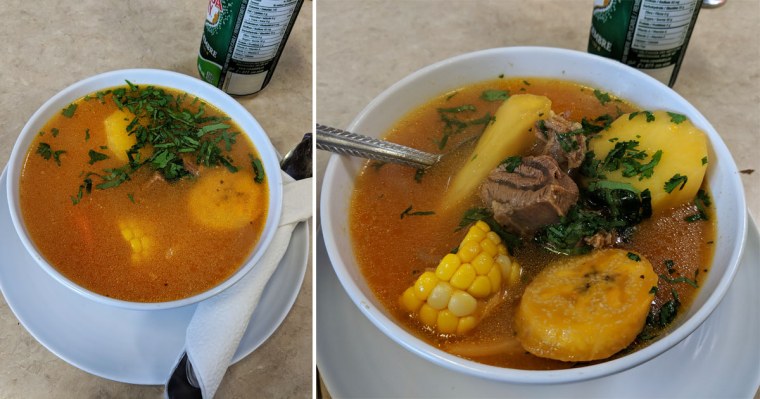 It was also seriously hearty, with huge chunks of cassava, carrots, plantains, beef, and corn.  This alone would have been a satisfying lunch.

But of course, there was still the main meal: a huge plate piled high with steak, rice, fries, two fried eggs, and a salad.  If you’ve got a big appetite, this is your place. 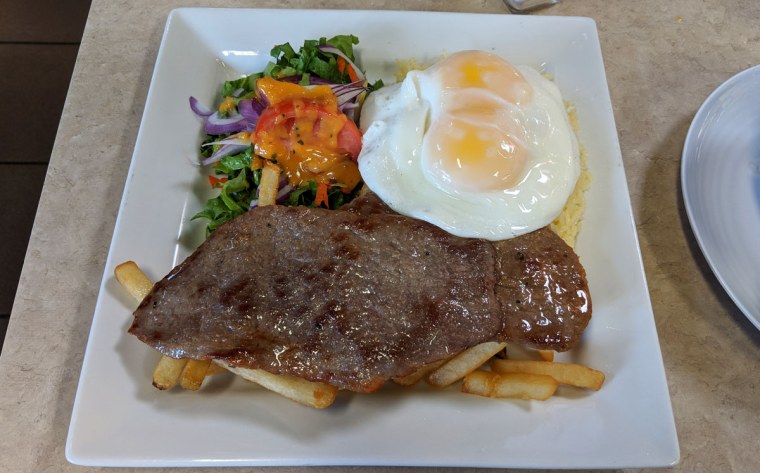 Oddly, I really enjoyed this even though most of the individual components weren’t all that great.  The steak was tough, the fries were run-of-the-mill, and the rice was fairly bland.  But once I started eating it all together, it coalesced into something surprisingly tasty.  The perfectly runny yolks on the two eggs essentially becomes a sauce that improves everything; if you get a little bit of multiple elements in each mouthful, it’s delicious.

I know, I know — fries aren’t exactly exciting international fare. It seems kinda like a cop out for a blog dedicated to trying new things from every country in the world.

But French fries are generally thought to have been invented in Belgium, and Belgian fries are probably the first dish that springs to mind when you think of that country.  So when I realized I was right near Moo Frites — a small storefront in Kensington Market devoted exclusively to the deep fried spuds — I figured I may as well give it a shot.

The simple menu consists of fries, a ridiculous amount of dipping sauces, and a handful of more elaborately topped fry concoctions.  I went with a small order of fries (a pretty generous amount for $4.25) with frite sauce for dipping.

The fries were quite good; they were tasty, though if I were to rank them against all the French fries I’ve had in my life, they probably wouldn’t even make the top hundred.

Maybe hoping for best-of-all-time fries is an unreasonable expectation, but given that this is all they serve — and that they take their inspiration from what is reportedly the best place for fries on Earth — I was expecting the them to knock my socks off.

They were generally above average, though the exterior probably should have been a bit more crisp, and the interior a bit more fluffy.  I definitely enjoyed them, but my socks remained firmly on my feet.

Maybe this is my fault.  I didn’t notice until it was too late that, for a one dollar surcharge, they’ll cook your fries in beef fat.  This would be the more authentically Belgian way of preparing them, so perhaps this would have pushed them over the edge from good to great.

As for the frite sauce, it’s a mayo-based sauce that’s described on the menu as containing capers, anchovies, and parsley.  None of those flavours particularly punch through; it basically just tastes like tangy mayo.  But it’s a good tangy mayo.  I know dipping your fries in mayo is an alien concept to many, but it’s the bee’s knees, trust me.