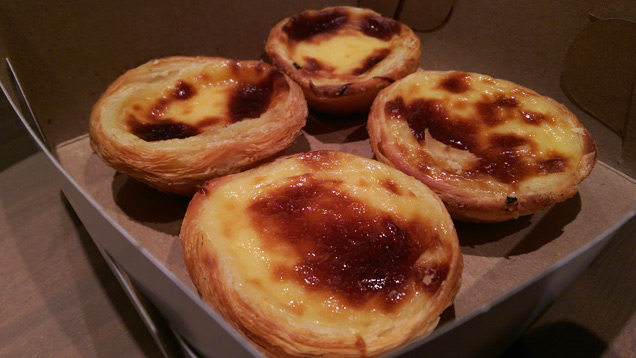 I really like egg tarts — in theory.  They’re actually a lot like millefeuille, in that they should be amazing but very rarely are thanks to the ravages of time.  That crispy, flaky crust?  Maybe I’ve just been exceedingly unlucky in a lifetime of eating egg tarts, but I don’t think I’ve ever had one where the crust wasn’t soggy to a certain extent.

I wanted the one from Nova to be different, but right on the first bite — when I struggled to get my teeth through the once-crispy, now-chewy crust — I knew it was game over.

Still, the custardy filling was satisfying enough to make this worth eating regardless.  Amazingly creamy, dense but not too dense, and with a mild lemony zip to cut through the richness, it was probably one of the better egg tarts I’ve had.

I’d be more upset about the sodden crust, but since I’ve literally never had one of these things where the crust was perfect, I’m just going to assume that’s a pipe dream.  I’d either have to go to a bakery where they sell so many egg tarts that they’re constantly pumping out new ones (i.e. fly to Portugal), or I’d have to camp outside of a bakery and grab one the minute they open.

I don’t think either option is going to happen any time soon, so soggy crust it is.